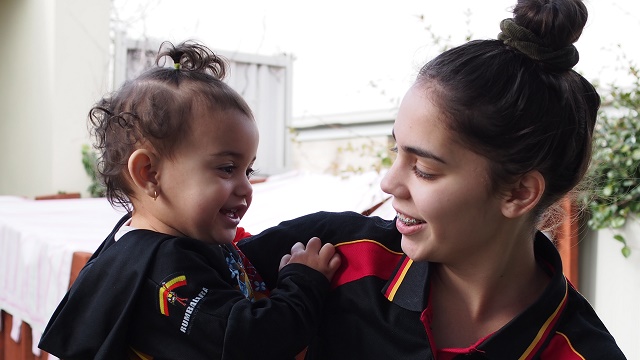 In the lead up to National Reconciliation Week, the Ross Trust Trustees awarded $150,000 over three years to SNAICC, with the express purpose of advocating for increased early learning participation for Aboriginal and Torres Strait Islander children.

SNAICC – National Voice for Our Children – the national peak body for Aboriginal and Torres Strait Islander children and families, will work with key decision makers over the next three years to address educational inequity and barriers to participation in early years learning.

The primary aim of this advocacy project will be to see a significant increase in the participation of Indigenous children (aged 0-5) in early childhood education and care services.

When Aboriginal children start school, they are often developmentally vulnerable because they have been under-represented in early childhood education and care. Frequently they start education later and for fewer hours than their non-Indigenous peers.

The significant participation gap in early learning is one of the gaps the Federal government is seeking to close, but it appears the New Child Care Package introduced in 2018 had several consequences which have done the reverse.

The package has generated new barriers to participation, by restricting access hours based on parental employment and study activity, introducing significant administrative burdens for families and services that have excluded many of the most vulnerable children.

As a practical example, many vulnerable families, do not have adequate online access to register for access to the package. The childcare services themselves need to spend time helping families navigate the complex system.

Errors and challenges with the registration for the package are often resulting in children missing out.

The difficulty with registration has not only resulted in a drop in participation in early childhood learning, but in turn has jeopardised the financial viability of dedicated Aboriginal and Torres Strait Islander services.

SNAICC is ideally positioned to advocate for change based on extensive consultation with communities and childcare providers, who have clearly articulated the challenges resulting from the New Child Care Package.

SNAICC will utilise its strong partnerships with a broad range of mainstream and Indigenous early childhood organisations to address this issue. It will use the advocacy grant funding to help drive a coordinated approach to reform current policy and implementation.

This work on early childhood education will align with the development of a whole-of-government National Indigenous Early Childhood Strategy which was announced in early 2020.

Not only will SNAICC work with stakeholders to drive change but it will also mobilise support by sharing messages across its networks, via social media and other online platforms.

During the May Trustee meeting, the Trustees also approved:

Image credit:
A childcare worker and her charge share a laugh at Lulla's Children and Family Centre, Shepparton.
Thank you to SNAICC – National Voice for our Children for the photo.