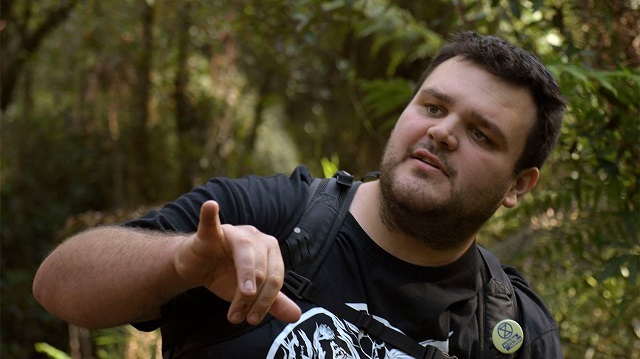 Advocating for our parks and wildlife

Hardly has there been a more important time to find ways to protect Victoria’s threatened species and habitats. But that is what he has put his hand up for, as the new Nature Conservation Campaigner with the Victorian National Parks Association (VNPA).

The Ross Trust has provided an advocacy grant of $223,000 over three years to the VNPA to support Jordan’s role.

Jordan has a conservation management background, is a lecturer at Swinburne University, and has worked on citizen science and advocacy campaigns in a voluntary capacity with WOTCH (Wildlife of the Central Highlands Inc.). But his passion for conservation started early.

“Growing up in that type of environment really makes it easy for ‘nature conservation’ to work its way into your heart and be something you want to do,” Jordan said.

“I have been involved in nature conservation work for around 10 years. This has included field-based citizen-science work, lobbying and working with politicians of all political persuasions, conducting guided tours and hands on conservation work in pest plant and animal management.

“My most important work has been to inspire others to pick up the conservation baton here in Victoria and help reverse the extinction crisis we have unfolding around us by empowering people to make changes in their lives that will help our wildlife and wild places.

“The greatest champions of conservation are everyday people who step up and make changes in their lives to help look after our wildlife and wild places.”

It is clear that Jordan will seek to inspire others along the journey with him. And right now, there is no time to lose.

He says “There is no doubt we are in a climate and ecological emergency, I have resisted using such language for a while but all the indicators are showing that the natural world is copping it.

“For example we have our Mountain Ash forests in the Central Highlands east of Melbourne in a state of collapse to meet paper pulp contracts. This not only threatens our state emblem the Leadbeater’s Possum but also the water supply for millions of people, as well as damaging one of our greatest carbon assets in fighting climate breakdown. The same story, with different drivers, is happening right across the state.

“Victoria is the most cleared state in Australia, most of the larger patches of bush left are on public land, which belong to all of us and we have a collective responsibility to look after it for all Victorians. Many of our habitats and iconic species now sit on the precipice of extinction and the decisions we make, battles we fight and minds we can change, will be the difference,” Jordan says.

The VNPA will build on its strong track record and work through this project to achieve better protection of:
• critically endangered grassy ecosystems in and around Melbourne
• woodlands of high conservation significance, especially in south west Victoria
• threatened forests and woodlands across the state, including specific areas in eastern Victoria.

Jordan says he will be working towards expanding our national parks and protected areas estate particularly in our critically endangered grasslands.

“Grasslands are overlooked in the conservation movement but hold some of the most amazing species we have here in Victoria; they are on the brink of complete obliteration. The Victorian Volcanic Plains is a landscape created by volcanic activity over time, they are like the Australian prairie, full of wildlife and amazing plant species and well worth preservation and conservation.

“I will also be working towards better protection for natural areas in the west of the state, the forgotten forests of Victoria.

“Many of the forests around our most iconic places like Gariwerd/Grampians and Cobboboonee National Parks are under threat of logging which will cause more loss of biodiversity in an already overly fragmented landscape. This work will help to improve the resilience of the wildlife and their habitats which need to adapt to our rapidly changing climate,” Jordan said.

He will also be working closely with a range of forest and regional conservation groups for better protection of forests across the state including areas in eastern Victoria such as the Central Highland forests.

“There are several complex legislative and policy processes at play here, including statewide biodiversity policy, Regional Forest Agreements, threatened species laws (state and national), and the National Parks Act. I will help VNPA engage in these processes as appropriate.”

To achieve these objectives, Jordan and the VNPA’s advocacy team will work in a number of different ways including:
• research
• using a variety of channels to communicate about local issues and possible solutions to ensure influencers and decision makers are informed
• using social and other media to engage the Victorian community
• stakeholder and community engagement
• lobbying and speaking with policy makers and regulators about reforms, and
• forming partnerships where appropriate, especially on issues requiring legislative change.

This work all sits under VNPA’s 12-year set of priorities, which was formulated after their 2014 Nature Conservation Review and guides VNPA towards their vision for ‘Victoria to be a place with a diverse and healthy natural environment protected, respected and enjoyed by all’.

“We know that achieving protection of habitats, particularly permanent protection, often takes many years over numerous political cycles, which is why we have long term objectives,” says VNPA’s Executive Director, Matt Ruchel.

And as for Jordan, he cannot wait to get started.

“The VNPA is an amazing organisation and I doubt many conservation groups in Victoria or even Australia have a track record like them. It’s not until I asked more questions that I found out how important the VNPA has been in ensuring our most iconic natural places are protected and helping improve the management our national parks and reserves,” Jordan says.

“The VNPA was established in 1952. Thanks to the generosity of our supporters and philanthropic organisations like the Ross Trust our track record includes leading the campaign for the establishment of the National Parks Act and strong advocacy which has resulted in the creation of over two million hectares of national parks and reserves in Victoria.

“It’s quite extraordinary how many pies VNPA has fingers in, all with an eye for protecting nature in the long term, which is very inspiring.”

Photo of Jordan Crook by Karena Goldfinch, used with thanks to the VNPA.