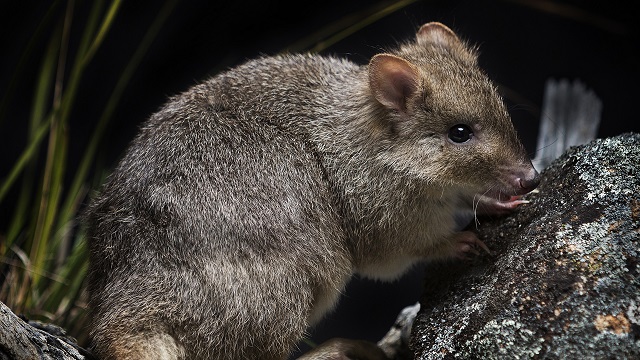 Eastern Bettong set for a return to Victoria

The Eastern Bettong is set for a return to Victoria.

The Bettong is listed as one of the 20 mammals targeted for recovery by 2020 under Australia’s National Threatened Species Strategy and the only population left in Australia is in Mulligan’s Flat in the ACT.

A grant of $200,000 over two years will help Odonata establish a safe haven for the reintroduction to Victoria of the Eastern Bettong and other priority endemic endangered species within the new Orana Farm Safe Haven, on the Loddon River.

The habitat restoration at Orana will take in 211 hectares of pristine plain grasslands and woodlands forest, establishing extensive biodiversity corridors across the farm and along the 33km of river frontage.

Odonata assists and partners with individuals and organisations delivering biodiversity-enhancing projects. With a unique business model, they have a focus on finding, securing investment for and supporting management of productive biodiversity-focused farms across Victoria. They have proven that biodiversity and regenerative-focused farming benefits all parties.

In this case, the Tiverton Rothwell Agriculture Fund has purchased the land and will cover the ongoing management of the sanctuary and threatened species reintroduction, eliminating the need for ongoing financial support from external sources. Already the work on the safe haven is well underway, with the installation of the feral proof fence – protecting the landscape from introduced species such as foxes, rabbits, cats and hares – nearly complete.

Remote sensing cameras, funded by the Foundation for Australia’s Most Endangered Species, will soon be installed to track and help with the removal of introduced pests from the site.

The Odonata team is getting ready to move some of the Eastern Bettongs from Mulligans Flat to the research reserve at Mt Rothwell and expect to have a self-sustaining population in Victoria within three years. The safe haven is a vital step in reversing species decline.

In addition to the re-establishment of the Eastern Bettong, the safe haven will eventually support a number of endemic flora and fauna species of significance, such as the brush-tailed phascogale, yellow-footed and agile antechinus, fat-tailed dunnart, legless lizard, swift parrot and a large variety of wildflowers and orchids.

The work on Orana Farm Safe Haven has set a number of other activities in motion.

Odonata Managing Director, Nigel Sharp, said “this cornerstone sanctuary has given us the confidence to start planning for a sister sanctuary next to Mt Korong.

“Discussions are underway with the Traditional Owners of the land, the Dja Dja Wurrung, to support their involvement in the sanctuary and threatened species management.

“One of the most important things we can demonstrate is that protecting bushland doesn’t come at a cost to farm productivity.

“We want locals to visit and be inspired by what is possible for native species in their community.” Nigel said.

The team is also planning a Gunbower to Grampians landscape restoration plan with their long-time partner Cassinia Environmental.

Odonata will use Orana as a case study for future projects and will be seeking additional ways to leverage philanthropy for greater outcomes.

“The local regional community will benefit as Orana Farm will serve as an exemplar of biodiversity-sensitive farming. We believe the sanctuary is the jewel in the crown and through the sanctuary we will inspire many locals and many across the country to think differently about their farm operations.”

One of the strengths of Odonata’s work is its innovative approaches, based on scientific research and, in this instance, working with university partners, the biodiversity benefits will be independently assessed.

Photo of the Eastern Bettong by Adam McGrath, provided by Odonata.

Photo of fence construction by Shawn Butters, provided by Odonata.