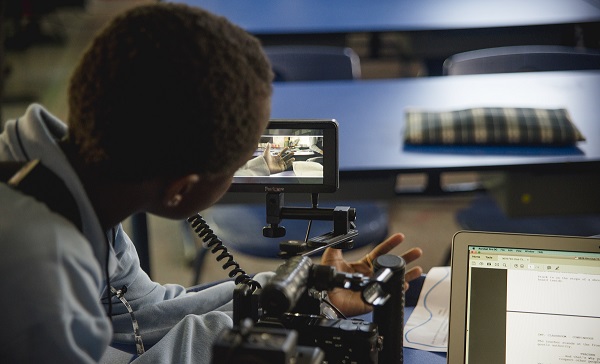 A $75,000 grant over three years has funded a project giving a new voice to marginalised and disengaged students in Collingwood and Fitzroy, through the medium of film.

A program to keep inner-city students from diverse backgrounds engaged in education through the arts has provided powerful benefits, according to 5678 Film Club Project Director, Priya Namana.

For three years, Polyglot Theatre has been working with students aged 10 to 14 running an after-school film club called 5,6,7,8, which is giving participants new ways to express themselves and at the same time getting them more involved with their studies &

“A lot of these students (many of whom are from culturally and linguistically diverse backgrounds and live locally in the public housing and around the school in Collingwood) have been identified as at risk of disengaging with education. Engaging them in drama, narrative, storytelling and script writing is giving them a breadth of expression they may not have had before,” Priya said.

“The benefit of taking the project and creating an after-school film club means that you’re away from the classroom model of teaching which can be didactic.

“The after-school club is more about problem solving and collaboration; it’s not an adult telling them what to do, so the expression is freer and not framed by school parameters. It’s more like a ‘club’ so it also creates a sense of belonging.

“What is great is kids finding such powerful ways of expressing themselves,” Priya said.

“We had one extremely shy student who wouldn’t say anything when he first arrived; the change has been remarkable. He’s now confident, expressive, engaged, open and confidently expressing his ideas and opinions because of the technical and socioemotional skills he is developing. Essentially he’s engaging differently because he’s getting used to his own voice.”

The benefits of Polyglot’s approach clearly flow to the classroom with teachers commenting on the greater interaction, confidence in expression and commitment to an activity that students look forward to and enjoy.

“We had another group of students demonstrating some behavioural issues and we paired them with a young, male film maker. The change in them just really highlighted the need for a positive male influence in their lives. It’s so important to give students access to a diverse array of people; adults who are prepared to give them their time. These boys developed a great film about overcoming bullying and managing the powerplays in school between student and teacher,” Priya said.

“The opportunity to screen their films and speak about their work, also gives them a sense of pride.”

And the final word goes to one of the participants: “Before Film Club I did different stuff, I couldn’t really manage myself but now I can manage myself a lot. I am very attentive and I listen more and I think before I say more and I am not the irrational self that thinks violence or being aggressive is the way to fi x it. Now I know how to express myself constructively.” – quote from a student at St Joseph’s School in Collingwood as part of a Victoria University evaluation.

Having built a library of films, a festival is now very much on the radar.